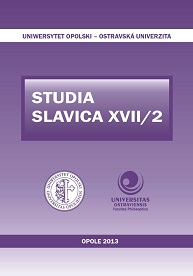 Summary/Abstract: Fridrich Gorensztejn’s story Malen’kij fruktovyj sadik takes up the problem key in the author’s literary works, of shaping up the self-consciousness of a Russian Jew in the USSR. The main character, who’s also the narrator, depicts the surrounding Soviet reality during Brezhnev’s reign, with a particular emphasis on the environment of intelligent Jews in the context of deciding upon repatriation to Israel, which meant crossing the borders between the character’s mother country and the new to him, but historically his motherland. The subject of the second part of the study is the Russian and Soviet cultural context, which implied Gorensztejn’s writing of Malen’kij fruktovyj sadik and its artistic shape. The references to Anton Chekhov’s body of work allow the metaphorical readings of the story. However the creation of stereotype-driven cultural lines in the Soviet society during the ‘perestroika’ by the Russian and Jewish intellectual elites enables to form the thesis that the interpreted story is implied by those events and is an expression of the author’s utopian belief in the ability of creative coexistence of Jewish minority in the Russian social and cultural space.