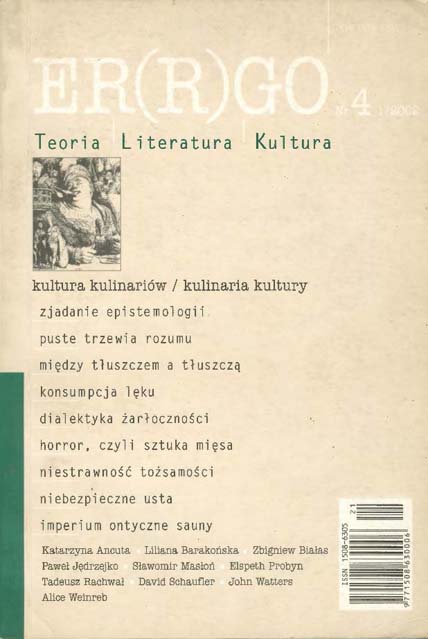 Summary/Abstract: Food exists, so to speak, epistemologically, its actual existence ending in the process of digesting which, in turn, transforms food, at least partly, into ourselves. All this boils down to a simple statement of the fact that we cannot live without food, without consuming the nourishing outside which, for some reason, we simultaneously exclude as irrelevant to the epistemological constitution of ourselves. Man, the subject and object of Alexander Pope's well known "knowing thyself", for example, is, again for some reason, posited away from, and above food and eating as an inconsumable, permanent entity that itself does eat, but only for sustenance whose task it is to sustain productivity, including the production of food. This production has become a culturally gendered activity. If, as Thorstein Velben claims, in the predatory order of things it was "the office of men to consume what the women produce," with the rise of the modern bourgeois subject it is the masculine which becomes responsible for production, while the mob and the aristocracy, gendered as feminine, acquire the qualities of passivity resulting in the inability to function by themselves, even to properly feed themselves.