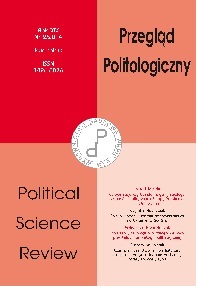 Summary/Abstract: This paper aims to analyze the attitudes of the Polish political elite and journalists to the 2012 parliamentary elections in Ukraine. It refers to the statements made by the leaders shaping Poland’s foreign policy, the President of Poland, Prime Minister, Minister of Foreign Affairs, MPs involved in the issues of Ukraine as well as political commentators and analysts. The broadly understood issue of the Ukrainian elections was to a limited degree addressed by such newspapers as Rzeczpospolita, Gazeta Wyborcza, Dziennik, and some online portals. The failed hopes to democratize Ukraine, following the orange revolution, made Poland withdraw from supporting a single political option in Ukraine. Polish politicians and journalists expressed little interest in the 2012 parliamentary elections in Ukraine. This made the diplomatic efforts of the President of Poland, Bronis³aw Komorowski, exceptional. In general, the Ukrainian election was perceived in the context of human rights, democratic standards and the geopolitical future of Ukraine. The fairly conducted election was to be a condition for the further support Poland would offer to Ukraine in signing an association agreement with the EU. Polish politicians and journalists would observe at the time that the foreign policy of Ukraine was ambiguous, being ‘suspended’ between Brussels and Moscow. The not entirely legitimate victory of the Party of Regions did not mean that Poland would block the integration of Ukraine with the West. It was concluded that despite the emergence of authoritarian tendencies in Ukraine, Poland should promote the rapprochement of its eastern neighbor with EU states. Looking at this matter in this way was justified by the Polish raison d’etat and the need to create a pro-Western and democratically oriented Ukrainian society.

Typologia polskich partii politycznych według kryterium programowego The typology of political parties in Poland made on the basis of their political platform 2014 Partie polityczne i ich elektoraty wobec kwestii nowelizacji ustawy antyaborcyjnej w Polsce (2007–2011) Political parties and their electorates to the issue of anti-abortion act amendment in Poland (2007–2011) 2014 Wybory do Parlamentu Europejskiego w 2014 roku w okręgu nr 13 : Elections to the European Parliament in 2014 in the district no. 13 : 2015 Stanowiska polskich partii politycznych wobec religii i Kościoła. Propozycja typologii Polish political parties to religion and the Church. The proposal of typology 2015 Pomorze Zachodnie – „bastion PO”? Wybory do Sejmiku Województwa Zachodniopomorskiego w 2014 roku Western Pomerania – “a bastion of the Civic Platform”? Elections to the West Pomeranian Parliament of the Province in 2014 2015
2022 © CEEOL. ALL Rights Reserved. Privacy Policy | Terms & Conditions of use
ICB - InterConsult Bulgaria core ver.2.0.0914