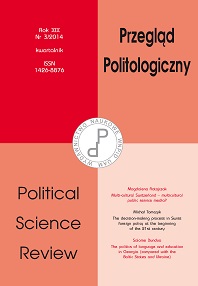 Wielokadencyjność prezydenta miasta po wejściu Polski do UE – przypadek Gdyni
Multi-incumbency of the mayor of city after Poland’s accession in the EU. The case of Gdynia

Summary/Abstract: The article is an attempt to show the specificity mayor of Polish city who is in term of office for at least three times. The analysis is based on the case of president Wojciech Szczurek from Gdynia who had been elected with great majority in direct elections. The context of Poland’s presence in EU structures was one of the most important in this analysis. The basic research question is as follows: if the mayor of town’s multi-incumbency may allow for greater use of Polish membership in the EU? The article presents the W. Szczurek’s results in direct elections conducted in Poland in the years 2002, 2006 and 2010. The comparison of the Gdynia’s absorption of EU funds was also examined, as well as the importance of “The Open Letter to the Polish Politicians and Journalists. Lets Defend Polish Interests” (4th Feb, 2014). In this text W. Szczurek criticized some European Commission’s actions in Poland.