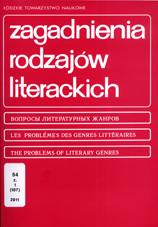 Summary/Abstract: The central issue raised in the article concerns aesthetic and ethical consequences of the narrative strategy adopted by Littell - the main character's monologue. What does it therefore mean that its reader learns about the represented world (an element of which, after all, is also the Holocaust) from the perspective of a character constructed around the principle of amplification of otherness and even alienation, the narrator who at the same time begins his story with the phrase "the mortal brothers", establishing a rela- tionship of closeness or identity? Moreover, what is the role of the device consting in the multiplication of inter- and archi-textual references in the novel (to myths, literary texts, musical forms, thus to cultural constructs) while at the same time emphasizing the documentary and referential aspects of the text? Final conclusion of the article is the assertion that Jonathan Littell's The Kindly Ones is a melange of many overlapping orders. These include: the "memoir" narrative, the documentary dimension of the Appendix, the debatable "suite-like" character, the questionably lofty dimension of The Oresteia and the sexual excesses of the hero in the oneiric world at the decline of the Third Reich, as if taken straight out of Pier Paolo Pasolini's Solo or the 120 Days of Sodom. The novel raises many questions and doubst, such as about the appropriateness of the type of devices used in the story one of whose themes is the Holocaust. One may indees infer that Littell falls into the trap of aesthetization, so unfortunate with this subject matter. But it is this very blend of kitsch, horror and moralizing project that is inherent to The Kindly Ones, which causes that for all the reservations one might have as regards various aspects of the novel, it is so disturbing. And for this very reason, the story of this strange hybrid hero, consisting of an excess of elements of uncertain consistency, leaves us alone with the nightmares it had roused in us.