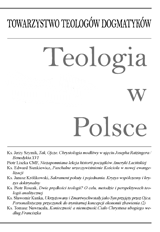 Summary/Abstract: In the light of the present imperialistic christology developed by Eusebius of Caesarea, it must be concluded that the sermons of St. Leo the Great contain traces of political theology. The Mystery of Incarnation, as well as the Death and Resurrection were also presented in the perspective of Christ’s royal dignity, which became the subject of not only admiration and reverence, but also imitation. It is worthy of note that the image of Christ the King appeared in the historical and theological works of Eusebius, as well as in the sermons of Leo in the liturgical context. The image in question influenced the piety of the faithful gathered in the basilicas of the Capital of the Empire.