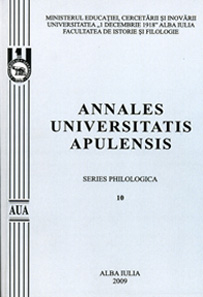 Summary/Abstract: The image of Hero is equally important both for traditional and modern societies. Any discussion upon this topic is necessary linked to a interdisciplinary approach. In the collective mentality, the Hero gives a special sense of coherence, providing for people the feeling of belonging to a solid and often exceptional community legitimated by historical or mythological facts. Even from ancient times, but especially starting from the 19th century (the century of nations and nationalism), the image of Hero has been ideologically used. Both fascists and communists invented or re-created an entire gallery of Heroes which served political purposes. In Post Communist Romania coexists, in an indistinct and confusing mixture, figures shaped by the communist ideology together with Heroes rediscovered immediately after December 1989. Two are the main characteristics of all national Heroes: exceptionality (following a romantic pattern) and representativeness (which allows each member of the community to identify himself with the person of the Hero). Burebista, Decebal, Ştefan cel Mare, Vlad Ţepeş, Mihai Viteazul, Alexandru Ioan Cuza, Mihai Eminescu s.o are all, in the same time, evoked as models and forgotten when there exemplar life does not serve to a specific national context. Being internationalist in his first phase, communism used mainly collective characters such as workers or revolutionary figures; in the last phase, where communism turned into a nationalistic one, it used Heroes like Burebista or Decebal attempting to prove the continuity and the fighting spirit of the nation. Doing this, inevitably, they re-wrote the history. After communism fall, its mythology still survived in the Romanian collective mentality. Nowadays, there is still a challenging dispute between the images communists created and the historical facts. From the perspective of imagology, the historical facts have no power to replace the image of these facts. Trying to have a critical approach regarding Eminescu for example, means, from the nationalist perspective, trying to deny the entire Romanian spirituality. We can put instead of Eminescu`s name, Ştefan cel Mare, Constantin Brâncoveanu or any other name of a Romanian Hero. This trend was indistinguishable changed after joining EU. Instead of having heroes important mostly from our national perspective, unknown abroad, it is to be found today a tendency of discovering figures with an international dimension (Dimitrie Cantemir, Mircea Eliade, Constantin Brâncuşi s.o). This is rather an elite programme than a popular one. The opposite is not possible for the moment due to the fact that in the Romanian collective mentality those who were rising from the ranks outside Romania are associated to a “special cast”, which was not sharing the sufferings and the hardship Romanians had to endure. In spite of all this, the new political, economical and social context will modify in time this perceptions. In which way, it is still impossibl