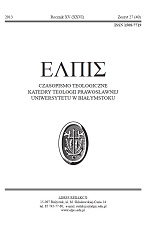 Summary/Abstract: The definition of Christianity replaces more and more the definition of Church. The ecumenical dialogue is being heldamong Christian “churches” which strive for Christian unity. The orthodox ecclesiology perceives Christianity as a feature of Church, the Head of which is Jesus Christ. Christianity in itself is more an ideological term than an ecclesiastic one. For Orthodoxy not Christianity but Church is the key term. Without Church there is either no Christianity, nor Christian life. The issue of restoring the unity of the Church, in orthodox point of view, is unacceptable because it is not Church but Christianity that has been divided. Orthodox as a Church preaches a truth in love and love in truth.