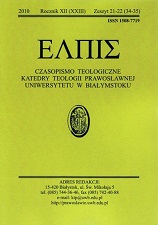 Summary/Abstract: The article begins from explanation of the meaning (from the point of view of the Orthodox Church) of the word „catholic” as one of the ontological attributes of the Church. Than the author presents the examples of the different kinds of meetings of Church hierarchs on the highest level and its titles/names. Than the article gives a short presentation of the initiative and history of the convene of Pan-Orthodox Council. The idea of that kind of meeting was born in the beginning of XX century on Ecumenical Patriarchate. The preparation to the Pan-Orthodox Council lasts many yearsand contains of many different kind of meetings. Meetings of the special commission that consists of representatives of each Autocephaly Orthodox Church concentrate on the different topics. During last meetings several important topics were discussed, as: Orthodox Diaspora, Autonomy and the methods of its granting, Autocephaly and the methods of its grantingand Diptychs. The author, who took part in some of these meeting,explains the positions of the various Churches in these matters as well asshares his opinions on them. In conclusion the author presents the opinion that despite many different problems on the way to prepare the Pan-Orthodox Council, this idea can be realized even in the near future.