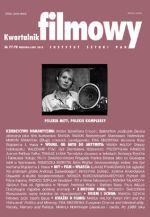 Summary/Abstract: This paper builds upon on insights of Artur Żmijewski on recent national blockbusters contained in a volume of "The Polish Cinema (Kino polskie) from 1989 to 2009: A Critical history". The insights go beyond the generally accepted views on those films. The author then examines the films "Katyń" and "General Nil” as phenomena reflecting the kind of “posthumous life” of the romantic paradigm of Polish culture buried nearly two decades ago by Maria Janion, that for decades was seen as anachronistic, but that remains popular and is occasionally revived. He describes its fate in the culture of the Socialist People’s Republic of Poland (PRL), and also considers memoirs as historical sources. In the last part of the article Adamczak presents a new perspective of seeing Jerzy Skolimowski’s "Essential Killing" and Anna Jadowska’s "General" as attempts of breaking out of the magic circle of constantly renewing opposition between romanticism and anti-romanticism.