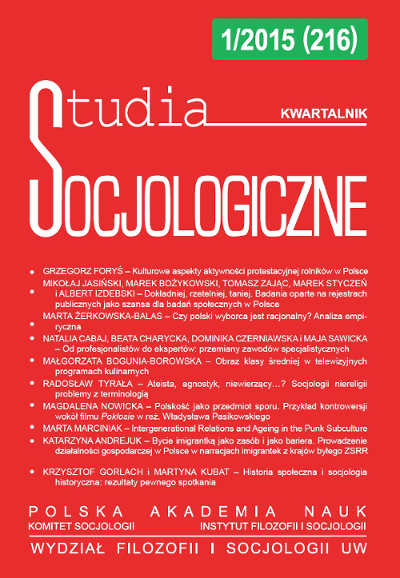 Summary/Abstract: The paper describes a qualitative analysis of farmers’ protests in Poland over the last 25 years. The analysis concerns the features of protests that manifest themselves in the cultural sphere. The theoretical perspective, adopted by the author, is primarily oriented towards the theory of new social movements and, in particular, the framing theory proposed, in its basic version, by David A. Snow and Robert D. Benford, as well as by later authors who developed the current theoretical research on farmers’ social movements and, more generally, on rural areas. The exploration was conducted on the basis of empirical material gathered in the course of protest events analysis. As a result, the following conclusions have been made: Firstly, the farmers in the course of their contestation refer to three fundamental frameworks: national, religious and peasants’; secondly, a complementary element are the frameworks developed on the basis of relationships between protesters and institutional, social, and economic environment; thirdly, the dynamics of the changes of frames in subsequent periods was focused on the elimination by the contestants of the frames that alluded to the dimension of religious-patriotic and peasants’ ethos; fourthly, the master frame, which referred to national symbols, retained historical continuity and the frame referring to the current position of this social category started to play an increasing role; fifthly, on this basis, the dynamics of the frameworks used by the farmers is reflected in the economic and mental changes relevant to this social category.