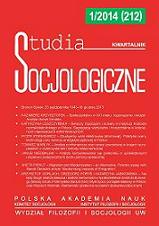 Nie tędy droga: analiza klasowa i analiza nierówności w społeczeństwie zwrotu kulturowego
This Way No Way. Class Analysis and Analysis of the Inequalities in the Society of the Cultural Turn

Summary/Abstract: The essay contains critical analysis of two publications on lifestyles and class order in Polish society as well as inequalities framed in the political discourse in Poland, the first of them edited by M. Gdula and P. Sadura, the other one authored by A. Woźniak. Both volumes are treated as a voice of young generation of Polish sociologists in the discussion of social stratification. Concerning the first publication the following remarks are made: 1. Bourdieu’s theory has been not framed enough in sociological tradition of class and mobility analyses; 2. Bourdesian class scheme has been perceived in a simplistic way; 3. General statements resulting from Bourdieu’s theory have been directly set against the statements made by individuals under study without an attempt to use any direct indicators of the vague notions included in the said theory; 4. Synthesizing conclusions are lacking. Concerning the second publication two flaws have been observed: 1. Lack of a more sophisticated type of analysis of the gathered data; 2. Lack of presentation of particular stages of qualitative analysis.