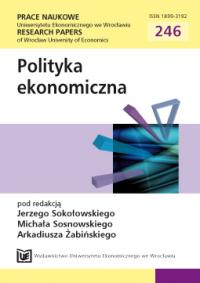 Summary/Abstract: The paper aims to discuss the changes in Polish foreign trade with Russian Federation from 1995 to 2010. The data quoted in the paper indicate that Russia is our important supplier of the commodities, especially: petroleum oil and gases. In 2010 almost 90% of the total Polish imports of these products came from the researched country. Generally, about 5% Polish total demand in 2010 was supplied with commodities imported from Russia (total import penetration rate of Polish market was 25% in 1995 and 50% in 2010). But in case of petroleum oil and gases, the level of the import penetration rate of our market by the imports from Russia is much higher. It increased from 15% in 1995 to almost 40% in 2010. It shows high and increasing dependence of the domestic demand on energy raw materials imported from the researched country.