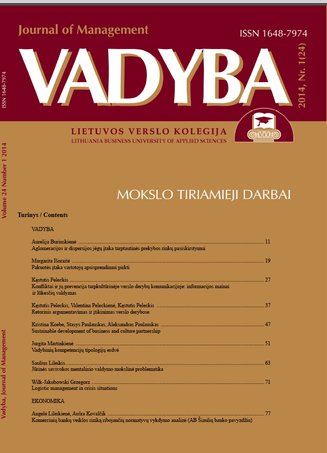 Summary/Abstract: Literature analysis showed that the commercial banking prudential requirements analyzed little in both theory and practice, especially after the commercial bank restructuring process. Major commercial banks normative indicators of liquidity and capital adequacy. These normatives are basic not accidental. Primary losses are absorbed from liquid asset, the remaining losses of capital. Thus, the commercial capital of the bank is like a last resort, through which absorbed the remainder risk of liquidity. The above indicators discrepancy normative may result in restriction of activity, as a last resort activities moratorium on the commercial bank is considered de facto insolvent. As shown by some of the authors’ research beginnings, the maximum loan currency and precious metals are not essential, but an important and necessary to consider only such standards as possible to get the help of an objective of a commercial bank operating efficiency profile. The maximum loan per borrower normative is like a ceiling to manage their credit risk. Although the normative is limits smaller commercial banks activity to issue large-scale loans, solution can be syndicated loans and strengthening the capital base. Minimum reserves standards is not commercial banks axis, which influences the commercial banking business and its continuity, however , this standard does not only systematic, but also affects the whole country's economic well-being. The main reasons given for the decline in the reserve Bank of Lithuania has a desire to strengthen the capacity of the banks to lend money to individuals and businesses as well as to minimize the gap between Lithuania and the EU mainstream compulsory reserve ratios in order to support the financial system of the country's convergence with the other member states. In addition, it should be noted that in that financial repression and the reserve ratio reduction signals to the public about the financial system by managing bodies desire for more money pumped into the economy. In this way, both the Bank before the merger with joint – stock company Ukio Bank, and after the merger and after the Basel III directives supported the inclusion of excess liquidity. Assessing the capital adequacy of the Bank's capital adequacy normative after the merger with joint – stock company Ukio Bank decreased, while after the Basel III directives integration grew, however, as demonstrated by testing under unfavorable conditions, there is a possibility the least likely scenario to fulfill the capital adequacy normative. The maximum loan per borrower ratio after the merger with joint – stock company Ukio Bank is growing, but the normative limit is not violated. Maximum total open position in foreign exchange and precious metals after the merger with joint – stock company Ukio Bank grew and it adversely affected the performance of the Bank's normative, although the threshold has been violated.