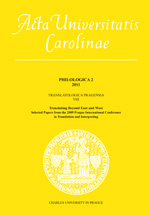 Summary/Abstract: In Mácha’s lifetime, his Czech contemporaries dismissed his magnum opus as un-Czech. In 1836, it received scathing reviews, and it was not until many years after his death that Máj was considered again. The first to receive the main work of the greatest Czech Romantic author with enthusiasm were its German-speaking readers. In particular, it was the Prague journal Ost und West in which the first reviewers of the poem Máj emphasized and appreciated not only the will to create a national literary language, but also the quality and virtuosity with which the Czech language was employed. Among all the languages into which Máj was translated, it was by far most often rendered into German during the course of the 19th century: in 1844 by Siegfried Kapper, 1862 by Alfred Waldau and 1882 by Karel Müller. Alfred Waldau wrote that Mácha was “one of the grandest and most beautiful stars on the horizon of new Bohemian poetry”. He accused the Germans of being ignorant of the poetry of this so close a nation, “whose land is so to speak a bridge connecting the East and the West”. What appealed most to him was Mácha’s mindset which seemed to correspond to the revolutionary spirit of “Vormärz” (West) and which was at the same time assumed to embody the idea of Slavic cultural unity (East). Czech literature was perceived as a certain type of mediator. Last but not least, Mácha, who had been influenced by the Weimar Classics, and whom Jungmann encouraged to participate in the process of creating a Czech national identity, represents, also because of his own German poems, the conflict-riddled interdependence of Germans and Czechs coexisting in a bilingual situation. The current paper pursues the question of how the various German language 19th century re-creation of the text can be interpreted when viewed from the perspective of the Central European horizon of reception.