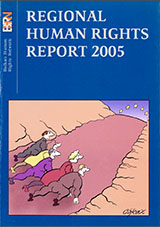 Summary/Abstract: Bulgaria is a parliamentary democracy of approximately 7.7 million persons. Regular parliamentary elections were held on 25 June 2005. They were generally recognised as free and fair by international observers despite some reported irregularities. The Bulgarian Socialist Party won the elections and after long negotiations formed a Government in coalition with the National Movement of Simeon the Second (NMSS) and the Movement for Rights and Freedoms (MRF). The main priority of this three-member coalition is Bulgaria's accession to the European Union. The new government has continued the nco-liberal policy of the previous governments.