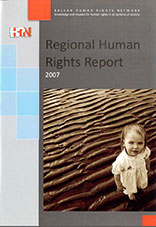 Summary/Abstract: The Bulgarian report contains information and analyses about the situation of human rights in the country in 2007. In the first year of full membership of Bulgaria in the EU, the realization ofthe human rights guaranteed in the Constitution and the compliance with international instruments in the field were not of satisfactory concern for the State. The main problems pointed out by the European Commission are corruption, organized crime, inefficiency of the judiciary and the administration, which impeded to the realization and full enjoyment of human rights by the Bulgarian citizens. In 2007 the main challenge for public reforms was the provision of consistent policy for better protection of citizens' rights, and mainly socioeconomic rights, for inclusion of disadvantaged groups and the better access to education, employment, health, housing, decent standard of living. The educational sector is still under reforms. A general positive trend in 2007, resulting from the EU membership, were the expressions of civil disobedience of different groups in society aimed at a more just remuneration for their work, as the teachers' strike, strikes of health professionals, public transport drivers, etc. Actions of solidarity with concrete causes for preservation of the environment, especially by young environmentalist groups, characterized the first year of European accession as well. There was overall positive impact of the practice of the national human rights institutions - the Ombudsman and the Commission for Protection from Discrimination.