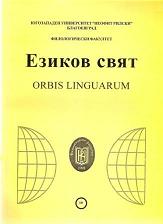 Summary/Abstract: The article reveals some typical errors of the interlanguage of Bulgarian learners of English for whom French is their first foreign language and English is their second foreign language. The focus of the article is on errors that represent French interference. Three basic patterns are discussed: word order, agreement of the adjectives, use of French words and phrases. The language corpus on which the analysis is based was collected between 2004 and 2009 and presents a set of examples excerpted from students’ writings of students trained at the English Studies and Foreign Languages Departments at the Philological Faculty of the South-West University ‘Neophyt Rilski’.