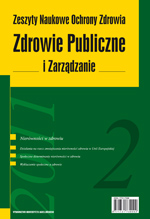 Summary/Abstract: The article is devoted to recognition of social inequalities in health status in Poland in 1998 and 2004 based on statistical analysis of survey data collected by the Central Statistical Office (GUS). Social inequalities in health are discussed in the framework of theoretical approaches explaining health variations. Social gradient is measured by the level of education. The analysis shows that educational inequalities in health are not only existing, but persistent and – as in other developed countries – tend to increase over time even though the overall health status of the population has been improving. Poor health can be attributed to poverty, involvement in unhealthy behavior (especially smoking) and insufficient social networking resulting in poor social support.