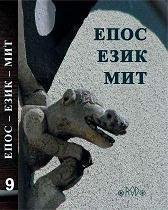 Summary/Abstract: The return to the theme “liberation of three chains-gangs” is dictated by the interest to the specific place of the song in the Bulgarian epic repertoire. In a general plan it can be taken as ethnospecific mark and it acquires the entire national peculiarities in some sense. These facts show us that the theme is important and deserves its prolonged actualizations of investigating. The work is based on research of the song material from the collection “Bulgarian national songs, collected by Miladinovi brothers” and especially on three songs, published in it, which have a relation to the realization of the theme “liberation of thee chains-gangs” while they are distanced from the “traditional” (in the sense that it is more often met) subject song plan. According to this plan the hero who liberates the slaves is Krali Marko and his name is always connected with this great deed. As a result of the research it is ascertained that it is most important to search a concrete impression which can be reached with a definite character. The character, on its hand, in each different context interacts with other characters and impressions. They have to be researched too because it is important to fi nd out what connects them in one relatively textual entireness. In this sense it can be proved that in the epos could be fi nd out the presence of “constant characters” but which realize differently depending on context of usage. The context is determinate according to the aim of creating of the song i.e. to the searched impression.