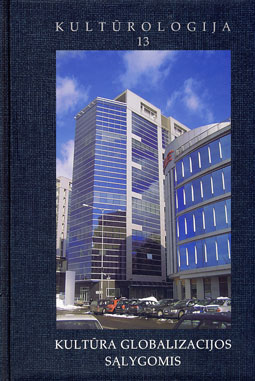 Summary/Abstract: This article discusses various aspects of the effect of the processes of technogenic civilization and globalization on the rapidly developing modern metacivilizational culture. Analyzing current civilizational processes the author shows that the gradual transition of humanity to a new postindustrial technogenic society constitutes the main contents of the present epoch and of the formation of the metacivilizational culture within it. Global metacivilization is not a mechanical amalgamation of various local civilizations and cultures. Its rise is directly related to a revolution in information technology, which, together with the most modern technologies, is the principal factor of contemporary culture stimulating an overall multicultural polylogue of civilizations. The revolution in information technology and concomitant tendencies of cultural globalization lead to the sharing of the spiritual experience worldwide, the principles of seeing the world, systems of values, cultural symbols. It also facilitates the perception of the cultural variety throughout the world and of the fact that different nations complementing each other similarly treat the same basic problems of human beings. In the changed circumstances the most powerful factor is not the traditional material production but theoretical knowledge, the intellectual potential of a particular nation and a complex motivating system functioning in society, which either spurs or impedes a free creative activity of the individual. Thus, a new system of values, which lays particular stress on the intellectual potential and knowledge, and urges people to permanently develop their creative power, is being built. Therefore, the countries having mastered information technologies and capable of creating new ones acquire incredible power and dictate their terms in various fields of economic and cultural life. Consequently, globalization promotes a completely new redistribution of power in the world, when the economic level of Western and Eastern states in the post-industrial stage of their development reaches the heights distinguishing them from other countries. Ousted from the first ranks of the technogenic and social progress kultūra some countries often become powerless in the face of cutthroat competition. Organized into strong economic and political unions, the superpowers monopolize the most profitable spheres of economic and cultural activities, impose their own terms of the control of up-to-date technologies and concentrate them only in postindustrial states, thus leaving the less developed countries increasingly dependant on the strongest ones. This important imposition of the principles of great inequality in the post-industrial informational society in conditions of total globalization brings to the fore the postmodernist principle of différence and pervades all spheres of intellectual creative relations...