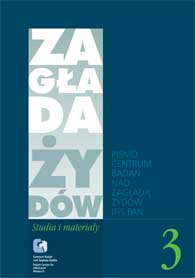 Summary/Abstract: This article discusses the history of the annihilation of sztetl Gritze, a Polish-Jewish town in Central Poland. In the first part of the article, the author describes the tragedy of the Jewish inhabitants of this small town: the creation and the destruction of the Jewish ghetto and the hardships undergone by those who lived there, and who were subsequently deported to the Warsaw ghetto. The history of the Grojec prisoners of the work camps in Skarżysko-Kamienna, Smoleńsk and Słomczyn are equally examined. In the second part of the article, the author analyses the Jewish-Polish relations in the occupied Grojec. She distinguishes two stages of these relations; the break between these two would have occured, she argues, at the time of deportation of the Jewish inhabitants of the town in February 1942 to the Warsaw ghetto. This event marked the beginning of the transformation of the sztetl Gritze into Judenrein, in which, up to now, the common Jewish-Polish past has been virtually non-existent/ obliterated.