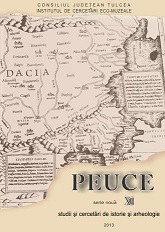 Summary/Abstract: Fibulae with bent stem are among the commonest dress accessories found on sixth-century sites in the Balkans—hilltop forts or cemeteries. Syna Uenze, the first archaeologist who dealt systematically with this category of artifacts, has advanced the idea that those dress accessories derived from fourth-century specimens most typical for the Sântana de Mureş-Chernyakhov culture. According to her, the fibulae with bent stem were a symptom of the barbarization of the Balkan provinces of the Empire. In this article, we propose a new classification of sixth-century fibulae with bent stem, which are distinguished from their fourth-century counterparts by the U-shaped stem. We have thus identified 12 classes of fibulae with bent stem, only two of which (3 and 6) appear in the entire Balkan region. Classes 1 and 8 are restricted to the northern Balkans, while the only classes that appear in Macedonia and the surrounding regions are 2, 9, and 11. The careful examination of the archaeological context in which some of those fibulae have been found contradicts Syna Uenze’s idea of an evolutionary development from the fourth- to the sixth-century fibula with bent stem. No fibula is known to have been found in an archaeological assemblage securely dated to the fifth century. This can only mean that the fibula with bent stem in the shape of the letter U is an essentially sixth-century fashion phenomenon. In fact, the majority of the specimens found in datable contexts appear to be from the second half of that century. Fibulae with bent stem have been found both singly and in pairs in houses, towers, cisterns, and churches built inside early Byzantine forts. However, as demonstrated by specimens found in Histria and Nea Anchialos, such fibulae were not restricted to the military population, but were also known in cities. Burial assemblages with fibulae with bent stem indicate that those were female dress accessories. Where the skeletal material has been properly sexed, it reveals that women buried with such fibulae had died in their prime age. Only occasionally were those fibulae deposited in graves of children, presumably of little girls. Fibulae with bent stem were most likely produced in the Balkans, and all fibulae found outside the Balkans have analogies in the region. A very interesting cluster of finds on the territory or in the hinterland of the modern city of Dnipropetrovs’ke, on the Lower Dnieper, raises new questions concerning the relations between the Balkan provinces of the Empire, the Crimea, and the steppe lands during the sixth and early seventh century.