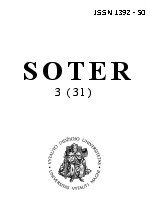 Summary/Abstract: Nicholas of Cusa (1402–1464) explored the boundaries of human reason for the sake of making religious belief believable. Unwillingly, he became a milestone in the process of rationalizing Christian theology. Giordano Bruno (1548–1600) is a proof to this perspective by the way he makes use of Cusanus’ approach. In his Spaccio de la bestia trionfante, Bruno discusses Cusanus’ attempts at the geometrical problem of squaring the circle. Bruno not only promotes his atomistic geometry, he also uses the metaphoric meaning of triangle for Trinity as an occasion to supplant ‘Faith’ with ‘Sincerity’. For Bruno faith is not anymore the true belief of religion, but rather ‘good faith’ and fidelity, i.e., social and political virtues.