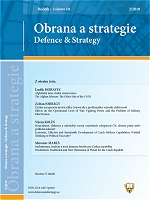 Summary/Abstract: This paper is focused on the comparison of strategy of state-sponsoring of terrorist groups Hamas and Hezbollah by the Islamic Republic of Iran. The strategy is described using five types of support – propaganda and political support, directing the terror, the use of financial leverage, instruction and training, the transfer of weaponry. The primary aim of this text is to clear up the Iranian role in supporting of two chosen Islamic terrorist organization and to explain its differences caused by historical, ideological, political and technical matters to the reader of this article. The text also contains the explanation of the origin, ideological background, political demands and the main terroristic activity of Palestinian Hamas and Lebanese Hezbollah.