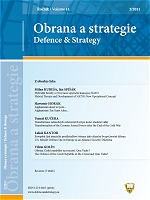 Summary/Abstract: Afghanistan is still not a stable state with strong central government controlling the whole state territory even after eleven years since American intervention and following the pursuit of reconstruction by allied forces. One of the main causes of this situation consists in interferences of foreign powers, which have their own particular and often mutually incompatible interests in Afghanistan. One of the most important external powers in the country is Iran. Therefore, Iranian involvement in Afghanistan is the main topic of this text. The main goal of this article is to identify and interpret major methods of Iranian enforcement of its plans in Afghanistan and also the characterization of those plans. The important issue of this text is also an understanding of effects of Iranian activities in Afghanistan and whether those actions have positive or rather negative contribution.