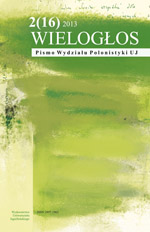 Summary/Abstract: Schulz and Simulacra is an analysis of Bruno Schulz’s short essay entitled Mythicization of Reality. Michał Kłosiński argues with Dorota Głowacka, who tried to interpret Schulz’s prose with the use of Jean Baudrillard’s category of simulacrum, that her understanding of the term is wrong. Kłosiński searches for places in Schulz’s theoretical essay, where he is the most ambivalent and where his ambivalence works against the text’s consistency. He performs an interpretation of some of Schulz’s notions, such as sense, myth and poetry, to depict how the author of Mythicization defi nes them and how the poetics of Schulz’s text somehow changes these definitions. The main objective of the analysis is to show that Schulz’s theory points the reader not to the concept of simulacrum, but to another Baudrillardian notion – the symbolic exchange. Kłosiński finds evidence of the possibility of such reading in the example given by Schulz of the fragmented body of a snake in legends and the poetic mechanism which he calls „the short circuiting of sense”. In the conclusion the author performs an analysis of Schulz’s view on poetry and how the mythicization as a poetic act works against simulacra and the excess of meaning produced in language to constantly recreate a bond with reality.