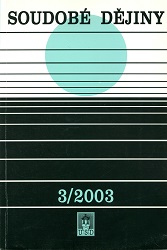 Summary/Abstract: The Czech borderlands were resettled by Czechs and other ethnic minorities after the escape, expulsion, and final eviction (improperly, although often called 'forced /or enforced/ transfer') of almost three million Sudeten Germans. Such a resettle¬ment process represented one of the largest migrations in the history of the Czech lands. During 1945-1950 period, one fourth of the overall Czech population participated in this process, attempting to launch their new existence in the areas settled until then predominantly by Germans. The author does not intend to investigate the process of the resettlement as such. The first part of the article deals with a methodology which is crucial for researching this process and the author acquaints us with the availability of documents and materials in the Czech archives. He suggests to open a new discussion concerning the post-war migrations, similar to that opened in Poland recently. Such a debate has been missing in Czech historiography until now. In the following two parts, the author raises the question to what extent the German expulsion was linked with the so-called policy of resettlement, which was organised by the Prague Settlement Office in Prague headed by certain Miroslav Kreysa, a Communist, and its Bratislava branch aimed primarily at the Hungarian population.