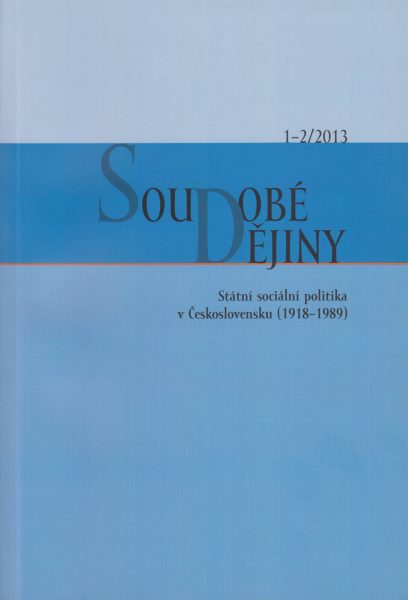 Kontinuita a diskontinuita vývoje sociálního státu v Československu (1918–1956)
Continuity and Discontinuity: The Development of the Welfare State in Czechoslovakia, 1918–56

Summary/Abstract: This article is concerned with the long-term trends in the development of social policy between the First World War and the mid-1950s. The author begins by summarizing the main ideas of his own previous articles and books. He emphasizes the continuity and discontinuity in the general conception of Czechoslovak social policy in this period. He also considers conceptual questions, particularly those that would help to explain how the basic terms are employed in historical analysis. The article moves between the two poles of the construction of causality – structural explanation and voluntaristic explanation. The content of the article can be aptly summed up in a neat metaphor: from Bismarck by way of Beveridge to Stalin. In personifi ed form, this shortcut expresses the long-term development of Czechoslovak social policy: from an emphasis on principles of merit, characteristic of the traditional German and Austrian social insurance schemes, by way of a considerably more egalitarian national insurance from 1948 (strongly infl uenced by the British system), to the Soviet model of social security, which developed from 1951 to 1956. The article also considers important changes in social legislation in the Czechoslovak Republic in this period, including the Protectorate of Bohemia and Moravia.