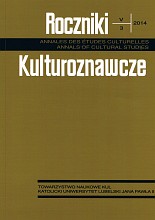 Summary/Abstract: The article is a preprint of a chapter of the book of the author on Cyprian Norwid’s Quidam (1863). Quidam is a narrative rhyming verse (poem), whose action is located in the Rome of the Emperor Hadrian, during the Jewish revolt of Bar-Kochba (132-135 AD). This action, presented in an unconventional way, is equipped with allegorical and typological features, still pointing indirectly, but clearly, on the nineteenth-century Europe and Poland. It contains clear allusions to the European structures of the police state, multi-ethnic mass societies, religious crises, uprisings, military conflicts, jovial and neurotic despots. The Rome of the second century, and along with it, the nineteenth-century Europe and Poland are characterized as endangered by a deeply hidden crisis at all levels of society, which manifests itself concretely also in intimate private life. The poet brings the crisis to a secret metaphysical turn in the history of the world, which takes place gradually since the descent of Christ on earth, but not ends in the nineteenth century. To the topic of the crisis in the poem corresponds the critical state of means and methods for the literary presentation of the world in crisis. The article analyzes the remarkable development of time and narrative material in Quidam. The poem contains elements adequate for several different short stories or a larger historical novel, or a Christian and humanistic parabolic epic. Different event topics are presented in this material, but these topics are split up, and their pieces are strangely intermingled with each other. Therefore, it is not surprising that the chronology of the poem has the characteristics of damage: in the face of the timeless eternity of God and His plan of salvation for mankind, human historic time must be defective for both the second and the nineteenth century. In this way, any conventional narrative hierarchy disappears, and instead, paradoxical parallels and contrasts between individuals, situations and eras emerge. Nothing and no one is here forever secondary or unimportant. Ultimately, not just the son of Alexander of Epirus, the central figure of the poem, but all men of the poem appear to be in varying degrees unconscious carriers of the truth of Christ. However, this fact does not ennoble them too, nor make them happy.