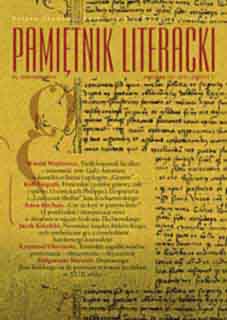 Summary/Abstract: Philippe Desportes, court poet of the Polish and French King Henri Valois, wrote, apart from "Adieu à la Pologne", ten other poems that contained a Polish thread, placing all of them in his erotic cycles. In the course of numerous changes done to the editions from 1576–1607, the extrapoetic content is blurred. The Polish theme is thus more and more melted into mere love topoi (Polish cold vs. flame of love; Polish “wilderness” – allegory of melancholy – vs. emotional liveliness; far Poland becomes a reason for the end of love), and helps to produce fine and pleasant paradoxes in the poet’s neo-Petrarchan style. On the contrary, Jan Kochanowski in his "Lyricorum libellus" reaches for strong paradoxes in the spirit of Horatian mannerism. Setting praise for the new Polish king Stephen Báthory at the background, he amasses oblique side swipes at Henri Valois, whom he formerly supported. Humbly posing himself as a poet who fell down from a horse (ode XI), Kochanowski cunningly shows through the cycle that he remains in the saddle at every volte.