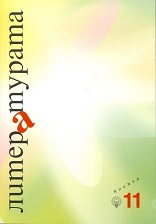 Summary/Abstract: Paul Gayer is Deane of the faculty of philosophy at the University of Bonn, he is professor in roman literature and among his interests are the theory of the subject and the Italian Renaissance. In his book Petrarca und die Herausbildung des modernen Subjekts (Petrarch and the constitution of the modern subject) he explores the influence of the Italian poet on the forming of the modern consciousness. In the chapter Petrarcas Canzoniereals Bewusstseins roman (Petrarch’s Canzoniere as a Novel of the Consciousness) Paul Gayer writes about Francesco Petrarca as the first poet of the modern subject, Canzoniere (The song Book) is therefore the first novel of the modern subjective consciousness. To reach the deeper realm of the dialectic of the soul implied in the work (in subchapter 3) he begins with the space-and-time-structure (subchapter 1) and the thematic structure (subchapter 2) of the work, then in subchapters 4-6 he analyses the notions and the thematic fields, connected to love and self, both personal and lyrical. The medieval triple-pole systematic of the soul with the instincts and the rationality as its extremes and the emotions in the middle is implied in Canzoniere, thinks Gayer, but with several important modifications, made by Petrarch: he liberates the human soul from its union with the reason, underlines its irrational nature and leads in the medium instance of “la mente” between soul and reason, which nearly pushes the latter away. What Gayer finds valuable and innovative in Canzoniere is that it explicates the overcome of the traditional soul systematic trough the dialectic of the subject, set into motion by categories traditionally thought as external to the subject (as love and the other), but here taking an external and internal position at the same time. To explicate his affirmation Gayer analyses in detail a number of citations of Canzoniere and concludes at the end in subchapter 7 that with CanzonierePetrarca proposes to the modern subject the psychological selfanalyses as alternative to selfalienation, the loss of pre-determined goals and the collapse of metaphysical substances.