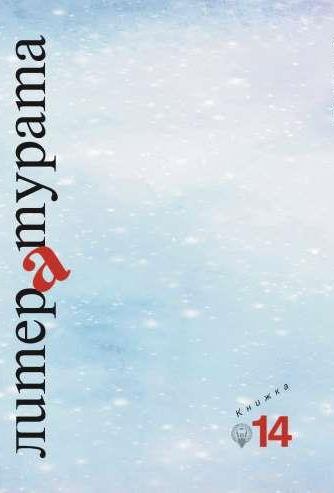 The Literaturata (Literature) journal was set up in the 1990s by the so-called Vazov Society within the Department of Slavic Studies of Sofia University. Its founders were the corresponding member of the Bulgarian Academy of Sciences Milena Tsaneva and Professor Simeon Yanev. Back then nearly 20 issues were released, their contents organized primarily around some of the major schools of literary theory. The translations took precedence, but Bulgarian texts illustrating the approach of the school in question were also carried out. After a hiatus of several years the journal resumed its run in 2007. It had by then become the official publication of the Department of Slavic Studies of Sofia University, but kept the tradition of having each issue organized around a more specific topic, such as globalization, writing and the Internet, ideologies, the policies of otherness, reading, the media, the teaching of literature in schools, etc. The proportion of translated texts has been preserved in the new editions, but the number of languages from which they are being made has been increased. Thus, readers are made familiar with works not only from English, French and German, but also from Italian, Spanish, Greek and Portuguese. The number of Bulgarian entries on the topic of each issue has also been expanded. Two new sections have been introduced of late: the “Debuts” section carrying texts by undergraduate and graduate students, and the “Reviews” section featuring the latest books in humanitarian studies. The journal is pronouncedly interdisciplinary in nature and solicits contributions from scholars from all Bulgarian universities and the Bulgarian Academy of Sciences. The Literaturata journal is being published by the Department of Slavic Studies of Sofia University and is being printed at the University’s own Publishing House. Its editor-in-chief is Professor Valery Stefanov, D. Philology, and the editorial board includes also Professor Amelia Licheva, PhD, Associate Professor Ivan Ivanov, PhD, Associate Professor Petya Osenova, PhD, and Senior Assistant Professor Noemi Stoichkova, PhD. The Faculty of Slavic Studies was established in 1888, with the foundation of the Higher Pedagogical Courses and the introduction of philological courses. The next year Slavic Philology was studied as a Major at the newly founded Faculty of History and Philology. Until 1946 the main degree programmes were in Bulgarian and Russian Philology. The first degree course in Slavic Studies was introduced in 1953. History and Slavic Studies became separate faculties in 1950. Since 1965 there have been two separate philological faculties at Sofia University – the Faculty of Slavic Studies and the Faculty of Classical and Modern Philology. In 1997 a new curriculum was introduced at the Faculty of Slavic Studies, to meet the requirements for acquiring Bachelor's and Master's of Art degrees. Slavic Philology and Balkan Studies offers five-year course of tuition, which leads to a Master's of Art degree . In 2003 a new syllabus complying with ESTF was introduced and actualized for all subjects at the faculty. Over 120 year-long history of the Faculty of Slavic Studies generations of students and scholars have kept, handed down and created the knowledge about Bulgarian people, language, literature and culture.