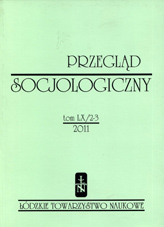 Summary/Abstract: The paper shows the possibility of a new approach to the problems of the city and its development. Firstly, it presents a brief outline of the attitudes forming the current main stream of theoretical and methodological stand-points towards the city: theory of a new international division of labour, theory of global cities, urban theory, information theory, dualisation, crisis and urban renewal, and finally, the latest one: theory of creative cities. Against this background, the article presents an outline of a new approach, called “rebirth” or “revival” of the city, i.e. the phenomenon of reviving – in terms of demography and economy – a whole agglomeration, which had previously been steadily losing population and economic base, and, on the other hand – a clear revival of central cities. The new approach is based on the belief that many cities have the potential useful for the economic success in today’s world, and that the chances for prosperity are not reserved only for modern cities in developed economies.