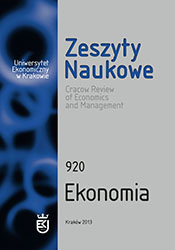 Summary/Abstract: The article presents the capital growth model created by M. Dobija (2007), concentrating on one of its most important components ‒ the economic constant of the potential growth of capital. It then looks at the most convincing corroboration of the existence of this constant, namely research conducted by B. Kurek (2007). Presenting this research in the context of the history of economics and economy as a whole allows the author to show that there is insufficient evidence to grant the assumptions which led Dobija and Kurek to conclude that such an economic constant exists. The author concludes that limits in the past as well as in the future should disallow economists from stating that such a constant exists.