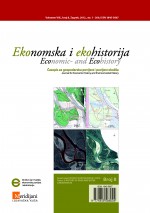 Summary/Abstract: The Ljubljana Marsh (Ljubljansko barje) is a tectonic depression that developed at the intersection of the Alpine and Dinaric regions. It measures approximately 160 km², or 0.8% of Slovenian territory. It is a cultural landscape with one of the largest complexes of wetland meadows in Slovenia, which has been protected as a nature park since 2008 (the Ljubljansko barje Nature Park). The Ljubljana Marsh has been settled at least since the Neolithic, when pile-dwellers lived in the area. Their pile-dwellings, which were raised above the shallow Holocene lake, are on the UNESCO list of cultural heritage sites since 2011 as part of the »Prehistoric Fascine Dwellings around the Alps« nomination. The first major alterations to the Ljubljana Marsh were made by the Romans, who partly changed the course of the largest watercourse in the marsh, the Ljubljanica River, in order to improve the river’s navigability, especially for transport between the quarry at Podpeč and the settlement of Emona (in what is today the southern part of Ljubljana). However, key changes in the landscape occurred in the second half of the eighteenth century, when the marsh began to be drained in order to obtain agricultural land and for later settlement. Drainage activities included the construction of a number of canals, which were used for drainage and for training the Ljubljanica River in Ljubljana, where the Gruber Canal was dug in 1780 in order to accelerate the drainage of water from the marsh. The main drainage activities were completed in 1829, which was followed by settlement of the marsh. During the 1820s a road was also built through the marsh and a railroad in 1857. Due to new deposits from the Ljubljanica River, major drainage works had to be repeated several times, but the marsh was never completely drained. This is connected with the problem of floods in settled areas in the nineteenth century and today. Important alteration of the landscape was also caused by intensive peat harvesting, which was the major source of income for people living on the newly obtained land in the marsh. Peat was still present across the entire marsh even 150 years ago, but one can hardly find it today. Urbanization is among the major pressures this landscape is facing today because despite the great flood risk it continues to spread into the marsh.