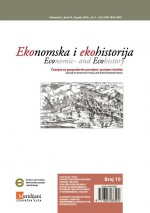 Summary/Abstract: In the paper, we are shedding light on the course of development of environmental thought in Slovenia. The first nature protection (but not environmental protection) programme in Slovenia was written by the Museum Society in 1920. It is considered one of the most well-founded nature protection documents of that time in international context. Direct effects on the environment were not felt yet, with the exception of certain industrial plants. First aspirations for concerted environmental protection efforts occurred in early 1970’s. This was the consequence of increasingly deteriorating state of the environment. In the 80’s, concerted efforts were put into raising awareness among the people and the responsible state authorities about the importance of environmental protection. At that time, civil society movements started to emerge, pointing to the problems related to pollution of the Krupa river, operation of the Krško nuclear power plant, locations of nuclear waste disposal sites and pollution caused by the Šoštanj thermal power plant. Individual activists had been fostering the idea of becoming formally associated, which led to the establishment of the party Greens of Slovenia. In the first multy-party elections after the World War II in 1990, the party won as much as 8.8 % of votes which made it relatively the strongest green party in Europe. Significant shift in environmental protection in Slovenia occurred after the country became independent in 1991. Two years later, the first framework Environmental Protection Act was adopted, which was aimed at addressing environmental issues from the perspective of sustainability. Although the issue of the environment and its protection became somewhat marginal in the society until the outbreak of crisis, we have been witnessing significant positive changes also in this area, in legislation as well as in actual behaviour.