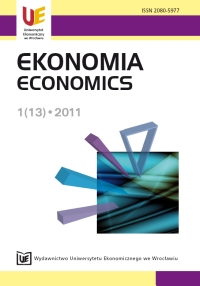 Summary/Abstract: The article states that there were different reactions of states in their economic policy mix approach to the 2007/2008 crisis. This could be justified if polices were similar in homogenous groups of states, which represented similar level of development, but this was not always the case. The paper argues that policies applied are often ineffective as they reflect actions, instruments, approaches characteristic for national and protective economies, not international, open, integrated ones. It shows that relatively small fall in GDP was accompanied by much a larger drop of international trade and FDI flows. The above noticed decreases were distributed unevenly among economies from three major groups of states: developed, developing and emerging.