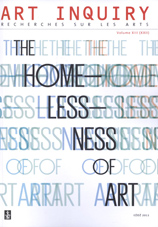 Summary/Abstract: The series of paintings from 1999 entitled The Rift in Time, where he directly relates to the extermination of his nation, is unique in Kupfermn’s artistic output. This series of ostensibly abstract canvases was created as a coordinated group of pictures. Unfortunately, currently it is dispersed – we can see individual canvases in different places of the world. This dispersion can be understood as a metaphorical homelessness, a search for their place in our comprehension. Moshe Kupferman was born in 1926 in Jaroslaw in an orthodox Jewish family. In 1948 he immigrated to Israel. Kupferman’s cultural identity rested on both Polish and Hebrew traditions. His art exemplifies the memory of seeing, making memory itself visible. It resounds with an echo of the Holocaust in Europe and the dramatic history of Israel. The guiding principle of his work was that “an existential solution to the problem of how to live on in the face of the past is offered by the moral caliber of the painting”. Kupferman was a friend of the Polish artist Marek Chlanda (1954). After Kupferman’s death in 2003, Chlanda returned to his series of eight pictures The Rift in Time from 1999, after his more recent visit to Israel. Divided by age, experiences and then the death of the older artist, Chlanda continues his effort to understand and to rework the meaning of Kupferman’s work. Moshe Kupferman’s The Rift in Time and Marek Chlanda’s After the Rift in Time – two series of pictures by the artists of two different generations, which we should see as important representations of the Holocaust managed to confront this paradox directly. They are memorial images that incorporated their audiences into the problem of the memory and representation of the Holocaust, relating these questions to the experience of the homelessness of art and the homelessness of thought in the postwar world.