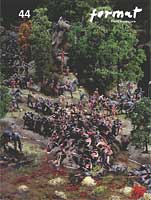 Prawda jest w pamięci
The Truth is in Our Memory

Summary/Abstract: Rafał Jakubowicz (born in 1974) graduated from the Art Academy in Poznan. Currently, he is working on his Ph.D. thesis at the Art History Institute. He wrote on Luc Tuymans, a Belgian artist, who concentrates on the subject of the Holocaust. In 2002, Jakubowicz designed a billboard with only one, mysterious word in it: “Seuchensperrgebiet”. The billboard was shown on the wall of a house in Kraków. The word was written on an old typewriter, similar to the typewriters used by the Nazi bureaucrats. The word is one of the neosemantic phrases, such as “Sicherheitspolizeilichen” (police security), “”Himmelfahrtkommando” (an SS unit), “Haeftlings-krankenbau” (hospital unit in Auschwitz), which were often used in Nazi documents. Victor Klemperer wrote that the language of the Third Reich included many such phrases, which were repeated and mechanically, often subconsciously memorized by people. Jakubowicz’s billboard was exhibited by the Outer Space Gallery during Jewish Cultural Festival organised in Kraków. The artist enlarged the letters from a typewriter in order to make it visible on a city wall. It isn’t an easily understandable word. Even, when carefully read, it cannot be understood by an average passer-by in Kraków. A person needs a German-Polish dictionary to translate the phrase. In 1947, Nachum Blumental published a lexicon of “innocent words”, which were used in Nazi-dominated Europe in the context of the extermination of the Jews during WWII. Each phrase was explained and documented with witnesses’ testimony. Jakubowicz concentrated on one word, which he used as a symbol. His billboard is a strong statement, which refers to the Holocaust.