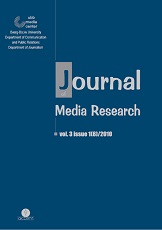 Summary/Abstract: According to Philippe Braud ([1991] 1996: 221), a debate is a confrontation meant to enlighten the citizens upon the arguments delivered, namely upon the moral, political, and technical validity of the objectives presented. Political debates have specific features: the main participants (the candidates) seem to turn themselves into beggars (Braud [1991] 1996: 109) who appeal to luring promises in order to stage a convincing discursive show. Having Benoit’s functional approach as theoretical background, we will focus our discursive analysis on the first debate that took place during the 2009 presidential campaign in Romania. The results prove that the Romanian presidential debate does not focus on acclaims and policies, as the functional theory applied to political debates from different countries showed, but, on the contrary, it is mainly focused on attacks and defenses.