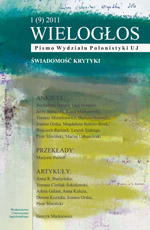 Summary/Abstract: The article constitutes a polemic with two critical books containing a proposition of a different, extra-institutional conception of literary narration. Joanna Mueller’s publication entitled Stratygrafie constitutes an attempt to create a comprehensive mythology of the world, one whose genome would be made up of poetry. According to the principle which unifies various experiences, a poetic work would contain senses which an active reading – understood here rather in the categories of a fertile „aberration” than in the sense of traditional reading with understanding – should only make present. In turn, in Anna Kałuża’s Bumerang (Boomerang), the phenomenon of poetic art is treated in anti-creative categories and is rather bound up with communication, as well as with socio-political contexts. Kałuża reiterates after Wolfgang Welsh that we are currently living in an era of post-demystification and whenever reality, which is created for us by pop culture, assumes in its entirety the shape of an aesthetic construct, there is no possibility of transgressing the boundary-line between art and life.