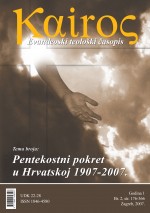 Summary/Abstract: The first part of this work constitutes of a presentation of the beginning, development, organization and the institutionalization of the Pentecostal Movement in Croatia. After the spontanious beginning among the Germans in Slavonia at the beginning of the twentieth century, the movement has developed among Croats in Slavonia during the Second World War, while toward the end of the twentieth century it spread in whole Croatia. At the beginning of the twenty first century there are five denominations involved in the movement, among which the Evangelical Pentecostal Church is the greatest in number. The second part deals with the basic characteristics of the pentecostal thought and practice: focus on Jesus Christ, baptism of the Holy Spirit as fulfillment with power for witnessing, evangelism that brings to conversion, encouragement for using the gifts of the Holy Spirit, expressing the dynamic relationship with God in the service and the awareness of the reality of Satan and the powers of evil.