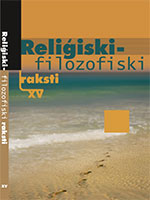 Summary/Abstract: According to the author’s view “semiotics is interested in exploring the ways in which the signs of conversion are fabricated or constructed by a person in accordance with a certain religious culture and tradition. If these qualities can be fabricated, there is the possibility that some people will be fakes, fabricators, or outright liars, as well as there is the possibility that other people are ‘true’ converts, and use those same signs in order to exteriorize, signify, and communicate their truthful inner mutation; moreover, there is the possibility that some other people, who have converted to a faith, intentionally suppress those signs in order for their conversion to remain an exclusively private matter. In order to understand the position of semiotics within the complex research area of conversion studies it is important to stress that probably semiotics is better defined as ‘a field of interests’, like medicine, than as ‘a discipline’ tout court, like sociology or psychology. Indeed, semiotics is characterized less by a common scientific literature, object, or method of inquiry than by a common point of view: signification as a perspective from which new light is cast on subjects traditionally studied by other disciplines. Every element of reality can therefore become an object for semiotic investigation, insofar as this element is looked at from the point of view of how it signifies and communicates its meaning. As a consequence, religion too, and conversion in particular, can be observed, described, analyzed, and interpreted as a semiotic phenomenon. However, the results of all these activities are likely to be different according to the specific semiotic theory that is adopted in order to carry them on. The article discusses the top three semiotic theories and their ability to look at the theme of religious conversion: Saussure’s semiotics, Peirce’s semiotics and the so called ‘School of Tartu’ developed by Lotman.