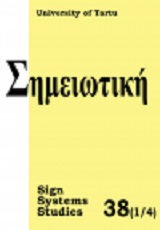 Summary/Abstract: In the twenty-eighth book of the Naturalis Historia Pliny the Elder claims that, if a chameleon’s left leg is roasted together with a herb bearing the same name, and everything is mixed with ointment, cut in lozenges, and stored in a wooden little box, this will bestow on those who own it a perfect camouflage. The ring of Gyges (Plato, etc.), that of Midas (Pliny), the heliotropium (Pliny), the dracontitis (Philostratus): ancient cultures abound with references to objects, recipes, and techniques able to bestow different kinds of invisibility, meant as a perfect resemblance with the environment. At the same time, these same cultures also teem with references to how to avert the perfect camouflage: for instance, by being endowed with a pupula duplex, a double pupil (Ovid). The paper explores such vast corpus of texts from the point of view of a semiotics of cultures, in order to track the roots of a conception of camouflage that, from these ancient cultures on, develops through intricate paths into the contemporary imaginaires (and practices) of invisibility. The paper’s more general goal is to understand the way in which cultures elaborate conceptions of invisibility meant as the perfect resemblance between humans and their environments, often on the basis of the observation of the same resemblance between other living beings and their habitat. Ancient texts are therefore focused on in order to decipher the passage from camouflage as an adaptive natural behaviour to camouflage as an effective combat strategy.