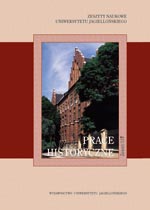 Królestwo Cypru jako obiekt zainteresowań państw śródziemnomorskich w latach 1192–1489. Próba zarysowania problemu
The Kingdom of Cyprus as an Object of Interest to Mediterranean Countries between 1192–1489. A sketch of the problem

Summary/Abstract: Under the rule of the French Lusignan dynasty, Cyprus quickly became the focus of interest to other countries: Sicily under the reign of the Hohenstaufen, Anjou and Aragon houses, Italian countries of Genoa, Venice and Duchy of Savoy, England and African Mamluk Sultanate. Initially the interest was based on political reasons, however, with the arrival of the Crusaders to the Holy Land and then the development of trade with Muslims there were economic reasons for seizing power over the island. What is more, the above deliberation clearly reveals the declining political position of the Lusignan dynasty who starting from the end of the 14thcentury could only observe how Mediterranean countries fought for control over Cyprus. After the death of Peter I of Cyprus (1359–1369), the most prominent king and the conqueror of Alexandria, the period of glory, when the island infl uenced international policy mostly – though not only – in the eastern region of the Mediterranean Sea, came to an end. From then on Cyprus was merely a subject of diplomatic, economic as well as military efforts and conflicts undertaken by Mediterranean countries. The present paper does not assume to exhaust the subject. However, it is an introduction to a broader research on the matter in question which is immensely relevant for depicting the medieval political and economic situation in the Mediterranean Sea region.