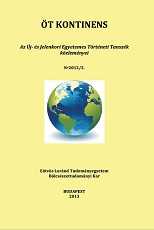 Summary/Abstract: In the 19th century the British women's suffrage movement couldn't produce obvious results. They needed a catalyst which accelerated the changes of political and human mentality in this issue - this was the First World War. Still up to that moment a lot of time had gone. The years following 1908 became those, during which the violent, rough women's suffrage policy was born. This was the period of extreme confrontations, temporary calms and results on the surface. I make an attempt to present the organizational development of the women' movement and the solidification of the resistant behaviour of the government policy in the study. I would like to shed on the reasons, how and why the suffrage movement was transformed into cruel fight from 1908. It is hard to answer the question unambiguously why the women were shut out from the active political life, since we may give a diverse answer to this question - I wish to emphasize only some in this bunch.