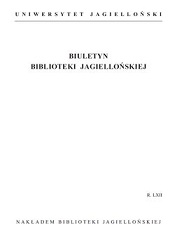 Summary/Abstract: Old press is a priceless source of information of various quality about a broad spectrum of realities of the life of past generations. This concerns also the religious life, including events in the biographies of members of the Church elites whose most prominent group was the episcopate. This is why facts connected with the curricula vitarum of particular bishops were often described in the Polish periodical press. The ordination of a bishop was a very important event, when a new member of the episcopate became a rightful successor of the Apostles. As such ceremonies were at the same time spectacular, had a rich liturgical arrangement and gathered many distinguished participants, they were an attractive topic for press coverage whose levels of accuracy, though, remained varied. It is not he purpose of the author of this paper to display the aforementioned multifacetedness of the press coverage of the ordinations of the bishops, but to provide a sui generis set of basic information about those events. In order to make the most of such testimonies by drawing from the variety of information contained in them further conclusions that may be interesting to particular researchers, one must first know where (if at all) adequate coverage is present in the press contemporary with these events. The current state of knowledge in Poland in this respect is definitely unsatisfactory. This publication is a step in the direction of positive change. It contains information about the ordination of altogether 215 members of the Catholic episcopate of three rites (Latin, Greek-Uniate and Armenian) in the territory of Poland between 1726 and 1900, in the form of quasi-registers. Arranged in alphabetical order (by the surnames of the ordinated), they contain the date and the place of each event, the names of the consecrator and the co-consecrators and, above all, a bibliographical record that directs the inquirer to a particular article. Provided with adequate indications, subsequent researchers will be able to start analyzing problems interesting to them and connected with this subject, already without spending time and effort in searching for adequate testimonies in the periodical press.