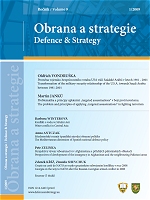 Summary/Abstract: The article deals with main areas of Spanish national defence policy within the Mediterranean area. This vital element of the Spanish defence policy is strongly connected with close cooperation within NATO and the EU. It discusses three main fora the Mediterranean policy has been being realized, namely the Mediterranean Dialogue, the Barcelona Process and the 5 + 5 Initiative, their basic principles, assumptions and role in the overall Spanish policy towards the Mediterranean region. It concludes with a few remarks stating that Spain wants to be present on as many for a as possible which deal with cooperation with the non-European countries of the Mediterranean region, being aware, on the other hand that only a synergy of efforts in the field especially between NATO and the EU would be a best solution also to omit duplication.