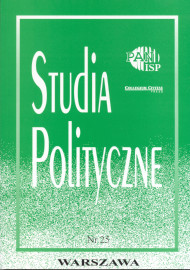 Summary/Abstract: Variable dynamics and new actors on the political, scene as well as the emergence, or rather, the intensifi cation of infl uences in the international environment on the part of the non-state actors and public opinion, results in the necessity to establish a coherent and effective security strategy. This article is an attempt at an answer to the question as to whether the European Security Strategy (ESS) of 2003 and the 2008 report on its implementation, which to some degree, complements it, may be acknowledged as the ‘genuine strategy’, that is, whether the former has the features proper to a strategy. In order to verify a working hypothesis that EES is not a complete security strategy, the identifi ed threats to, as well as the specifi c interests and objectives of, the European Union have been articulated in an unusually general manner, while the postulates in respect of undertaking specifi c actions have not been spelled out at all.